This guest blog features a summary of research on the microclimates affecting art in the bathroom by Margalit Schindler, a graduate fellow studying preventive conservation at the Winterthur/University of Delaware Program in Art Conservation. For their research, Conserv provided access to their analytic tools and wireless sensors, including an outdoor temperature and relative humidity monitor.

The Question: What happens to artwork displayed in a bathroom with a shower?

There is significant informal and anecdotal evidence that people display artworks in bathrooms. This project examines the environment of a full bathroom, used regularly.

Monitoring the temperature and relative humidity will inform the preservation risks of placing objects in an occupied residential bathroom.

The intent is not to dissuade private collectors from displaying their objects in bathrooms, but rather to inform about the potential risks associated with this choice. So… what happens when you have art in the bathroom?

The Plan: Put dataloggers and different materials in the bathroom, then shower normally

Loggers donated by Conserv were used to monitor temperature and relative humidity (RH) in the main bathroom at the author’s home – a two-story, single-family house, built in 1921 in Wilmington, Delaware (fig. 1). Various materials were placed adjacent to the shower and monitored for change over time (fig. 2). Figure 2. Photo showing experimental setup, taken January 31, 2021. The Laird outdoor datalogger is pictured, along with a @pawblopicasso painting, both donated for this research.

Data was collected from January 31, through March 31, 2021. Large spikes in relative humidity are visible for each shower data point (fig. 4). As quickly as the RH goes up, it also goes down, so the extreme high is not sustained. These fluctuations are relatively quick, as seen in Figure 3. The shower lasted 6 minutes; RH spiked from 44% to more than 75%. 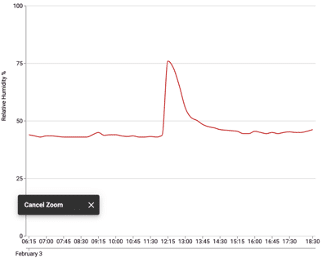 After 1 hour, RH significantly decreased; after 3 hours it returned to near starting RH. The increase in RH is sudden and drastic; the transition back to stasis is a much more gradual curve. The short duration of these RH bursts may indicate that well-sealed frame packages might be able to buffer against these fluctuations. During summer, it is expected that a higher resting RH (above 65%) will be sustained. This may lead to lower risk of mechanical damage but higher risk of mold growth and dust cementation.

Figure 4. This time series graph shows relative humidity in the bathroom and adjacent bedroom over two months. Each spike in RH correlates to a shower, which is labeled and color-coded to indicate whether the door was open or closed. Underline indicates the fan was used. Showers labeled “X” were not recorded (error). Data processed using Conserv web-based software.

Different types of art in the bathroom

Photographs are layered, composite objects, containing cellulosic, proteinaceous, and inorganic material, all of which will react differently to changes in RH. These differentials can cause movement and therefore delamination or planar deformation.

Significant dimensional change was noted in the unmounted silver gelatin photograph, due to the sensitivity of both the paper and gelatin layer. It began to distort after the first shower; it uncurled and re-curled with every subsequent shower (fig. 5b). The mounted photograph was less flexible, the restricted mobility led to the flaking of the gelatin layer (fig. 5c). Figure 5b. The unmounted photograph has severe planar deformation at the end of the experiment. March 31, 2021

A brass coupon was resurfaced with steel wool and began the experiment with a uniform and polished surface. Over the two months, the surface became darker and dull, indicating the beginnings of oxidation and corrosion (fig. 6). Curiously, the surface directly under the clothespin remained unoxidized and shiny, because it was protected from exposure to moisture. Figure 6. Detail of brass coupon, showing a differential dulling of the surface, which stayed protected beneath the clip. March 31, 2021.

All painted surfaces are inherently layered, composite objects that include the paint film and the substrate (here, wood). Wood is hygroscopic; it swells/shrinks with changes in RH. Eventually, this will affect the paint layer. While media flaking was not observed, there was a significant crack that formed along the bottom right miter after the RH reached 100% for the first time (fig. 7a). Once it happened, it did not get worse. This speaks to the idea of object proofing: “If the future climate conditions do not exceed the range defined by past conditions, then the risk of future mechanical damage is negligible” (Michalski 2007). Condensation created water spots on the painting surface, causing immediate visual disturbance (fig. 7c). The introduction of liquid water to the paint surface may cause the film to swell and increase the risk of both chemical and mechanical degradation. Additionally, there was significant dust and grime collection along the top edge of the painting (fig. 7d).

Takeaways: Look before you display

This research definitively shows that taking showers causes ambient relative humidity to increase in the bathroom. This microenvironment likely will increase the rate of degradation of many materials, including those commonly used in artwork or décor.

Materials that are sensitive to fluctuations in relative humidity or condensation on the surface will likely react or degrade more quickly if displayed in a room with a shower.

The goal of stating this is not to dissuade people from decorating their homes as they like, but rather to inform decisions about display location for special or sensitive objects.

This thinking can be broadened to other locations in residential spaces. Other areas with potential risks include (but are not limited to): above a fireplace, in the kitchen, or near a window. Readers are encouraged to critically examine all spaces before displaying artworks. The Small Collections Monitoring Program – What is it? Windows to the past: Shutter conservation on the Winterthur estate
Working On-Site from Far Away: Remote Environmental Monitoring with Conserv